Following the government’s announcement that organised outdoor sport can resume from Monday 29 March, the RFU has published a new Return to Community Rugby Roadmap. Please read below...

The roadmap summarises the plan for a phased return to full contact rugby, subject to each step on the government roadmap being met.

A six-stage process has been created to guide rugby coaches and players through the return process from now, to Ready4Rugby, O2 Touch and limited contact training sessions at the end of March, to full contact matches anticipated in June.

As previously confirmed, the 2020/21 league structure has already been cancelled. However, as in normal years, rugby clubs will be able to host friendly fixtures in the adult game during summer months if they wish. As long as Covid-19 infection rates are kept under control, all adult and age grade competitions are expected to start in September, as normal, under full laws.

As of 29 March, community rugby clubs may hold contact training sessions, excluding scrums and mauls, and host Ready4Rugby, O2 Touch and Tag rugby matches between clubs. This applies to adult and age grade players. Contact should be built incrementally and RFU guidance will include that training sessions should not exceed 20 minutes of contact at this stage.

After four weeks of contact training to enable players to build fitness levels and condition themselves physically, matches with adapted laws (no scrums or mauls) will be permitted against other local clubs from 26 April (Stage D2 on the roadmap). It will be clubs’ and players’ individual choice as to whether they play adapted contact or continue with Ready4Rugby, O2 Touch or Tag rugby.

Over the next couple of weeks (last 2 wks of March), we will share detailed stage-by-stage guidance to make the return to rugby as simple and as safe as possible as we progress through the stages.

When Step Three on the government roadmap is reached, it is planned for community rugby to move to full contact training, including scrums and mauls. This is Stage E1 on the roadmap. Two weeks after Stage E1 has been reached, full contact matches can  begin. (Stage E2 on the rugby roadmap).

Community Rugby will move to the final Stage, F, when the government roadmap reaches Step Four, provisionally in June, at which time we anticipate all remaining restrictions will be lifted.

The current age grade season will end on 31 May, however the age grade out of season regulations will be suspended for 2021 and replaced with a range of permitted non-contact and contact training and playing.

The purpose of this is to support player safety, contact preparation and player retention for any out of season age grade activities.

The process for 17-year-olds playing adult rugby is suspended from now until Saturday 1 January 2022. These are some of the players at greatest safety and retention risk due to the rugby they have missed.

In season 2021/22, the shift to the next set of age group rules is delayed until Saturday 1 January 2022. (E.g. U10s in 2021/22 will play U9 rules before Christmas and U10 rules after Christmas.) For girls that are in the multi-age U13, U15 and U18 bandings, they will move into that age band and play to those rules from September. Training and playing guidance will be provided to ensure safe progression and transition.

“As hosted during lockdown, we will continue to run webinars for coaches, players, match officials and volunteers to prepare for the return. Guidance will include advice for coaches on how to gradually and safely reintroduce contact, as well as ways to re-engage players and develop their skills over the coming months.

“As more guidance is published by government, we will provide facilities guidance to ensure clubs are in the best possible position when they’re able to re-open their clubhouses.”

Until 29 March, adult and age grade rugby remains at Stage A on the Rugby Roadmap, meaning individuals can exercise alone or with one other from another household. An exception to this is for age grade players involved in schools or  colleges organised activity who are permitted to follow the Stage D guidance. 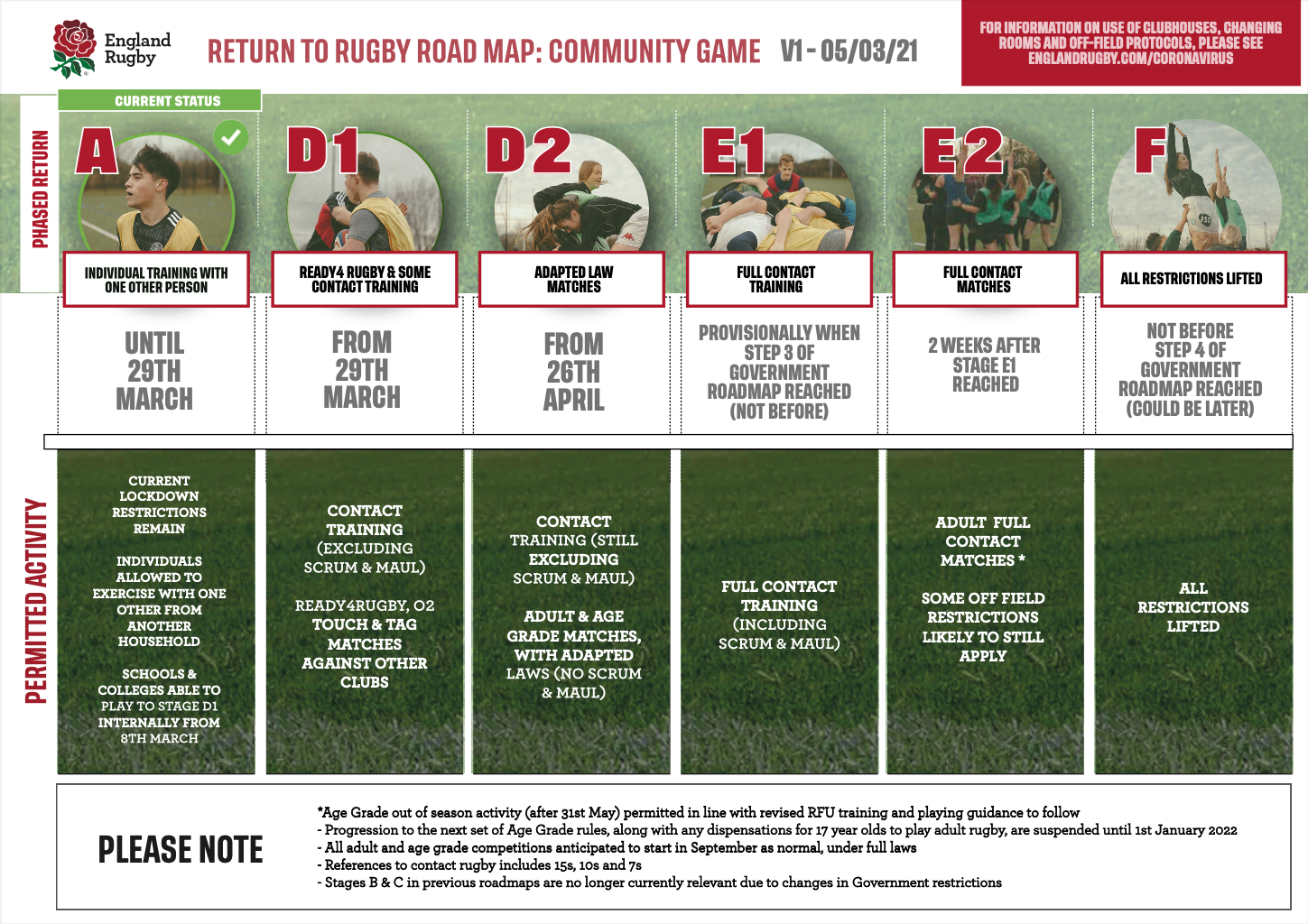