Members and parents maybe aware of the debate and legal action from players with the RFU which is making headline news. The club is concerned that players and parents alike will be concerned about content in the media right now and the risks when playing the game we love.

Whilst many of the elite level players considering legal action played and trained some years ago it is right to point out the RFU has, in the modern game, recognised the dangers which has resulted in the current safeguards in both training, game and player development.

The RFU states that concussion is ‘a traumatic brain injury resulting from a blow to the head or body, which results in forces being transmitted to the brain’. The RFU has stated according to their figures one concussion occurs per team every 25 games in adult male rugby and in 15-18 year olds in 1 concussion per team every 10 games. Our own club incidents of injury recorded in the club accident book are considerably lower than these national statistics.

As an RFU accredited club we comply with all safety advice and measures to reduce the risk of injury including concussion. Club coaches attend all RFU training courses achieving Sport England accreditation and attend workshops on a regular basis.

Head Case, recognised as one of the UK’s leading concussion awareness and education resources, is one such course which raises awareness of concussion in the game . For coaches Head Case is mandatory. Players are encouraged to complete the course as well so they can spot the symptoms. St Andrews RFC will continue to invest in its coaching team in 2021.

The club has adopted the RFU ‘Return to Play’ policy which ensures should a player suffer from concussion they have fully recovered before they rejoin their team.

The RFU states that concussion is ‘a traumatic brain injury resulting from a blow to the head or body, which results in forces being transmitted to the brain’.

A concussion DOES NOT only occur when a player has been ‘knocked-out’. 90% of concussions will occur whilst a player remains conscious.

Symptoms to look out for:

Temporary short-term amnesia (Memory loss)- e.g. Losing trail of thought, walking into a room and forgetting what you walked in for

What to do if you have suspected concussion

The above symptoms don’t always mean concussion, but tests will be put into place to check for a suspected Concussion. DO NOT IGNORE the symptoms and continue to train until you are given the all clear.

If concussion is diagnosed, then the RFU Graduated Return to Play will be applied and followed. 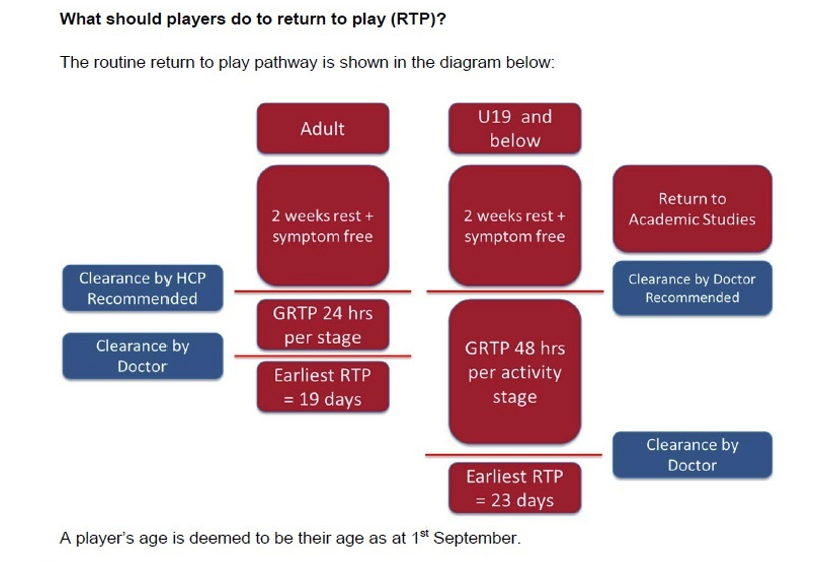